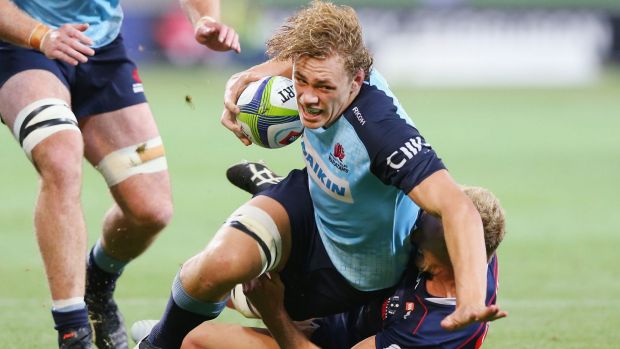 Frans Malherbe – This man is a personal favourite of mine. Last year he rotated the start with Vincent Koch, and the two of them were probably the most valuable props when they started. Now that Koch has moved on, that leaves one person to take the mantle as the big man MVP. He has been eased into the super rugby season with a bye, being rested last week and a bench position earlier in Rd 1 & 2. I believe the 32pts he scored in Rd 3 is probably a better representation of his value. Whats more, Springboks coach Allister Coetzee considers Malherbe a potential leader for the international side. My tip, he will start to rack up the minutes and the points for the rest of the season, definitely one to pick up and hold.

Ned Hanigan – Ned looks to have secured the No. 6 jersey for the Waratahs for the next few weeks with a barnstorming starting debute filling in for the injured Jack Dempsey. Named as a second rower at Fox sports Fantasy, he now fills the criteria of a lock playing in the loose forwards that I have spoken about a few weeks in a row. Last week Ned scored 52 points from 5 runs, 5 tackles, 3 lineout takes, 1 lineout steal and a try to show that he can score in a number of ways. This breeds stability when it comes to scoring making him a rock solid sleeper pick for your team.

Shota Emi – By now everyone has jumped on the Kenki Fukuoka band waggon, but the real Sunwolves man I want to go all in on is the Wing/ Fullback Shota. Why is he so valuable you ask? Not only does he average 7.6 runs a game this season (and 9 when he plays 80minutes), but he also led the competition for offloads after Rd 4 with 7. On top of that he already has 21 tackle breaks! Not only is Shota a live wire that has now started to prove his ability to perform week in week out, but he is at the end of a Sunwolves team that is entertainment at its absolute best. If you need an outside back, this guy is probably available, get in quick!

Chance Peni – I know he has had an outstanding first four games, but I for one, am still not convinced that he is a top shelf outside back. His team will continue to struggle for form and this alone will make it difficult for him to consistently score well. Whats more his scores of 68, 31 and 33 (prelim score only) were all on the back of a try. What worries me is that he only had 3 runs in Rd 1 and then again in Rd5 (7 runs in his other two games). Despite his obvious athleticism, I think we will seem him starved of ball against stronger opposition. If your outside back situation is dire he may be worth the risk, otherwise he remains one to hold and watch.

Richard Buckman – Picking what some of the New Zealand teams are doing right now is next to impossible. After a successful return from injury “The Barracuda” has been named to start his second consecutive game at 12. This kills me because I am holding on to points machine Rob Thompson! 2015 he had a solid 27pt average when he was a regular starter, and last week he clocked up 31pts without doing much of anything. If you are looking for a centre and are happy to take the risk, The Barracuda is surely an unpicked centre who could be solid for most of the season. My guess, we should know who the preferred 12 is by next week; two weeks rest for Thompson is understandable, anymore and he is just plane unwanted.

Seabelo Senatla – What an outstanding debute into Super Rugby. 7 runs for 118 metres, 9 tackle breaks, 3 line breaks  and 2 offloads. Sadly though for the Senatla fans, Cheslin Kolbe will be back soon, and with Leyds and SP Marais owning their outside back positions, his time may be limited to a few minutes off the bench from now on.

If you missed it check out our Rd 5 summary and advice for Rd 6 Unreal Kriel and our up to date injury list at The Casualty Ward.

See you next week for more on the Stock Market. Good luck for Round 6!