There has been a lot of confusion around the Super Rugby draw over the next few rounds, as they are split over a few weekends. Here is our understanding of how Fox Sports plan to work their fantasy competition over the 2 rounds:

Round 16 – The round is again split into two parts, 1 prior and 1 after the international break.

Part 1 – Prior to international break – Not counted on Fox Sports Fantasy, so it is effectively a bye if you use their scoring system. However if you simply export their scores and run your own competition like we do, you can access player stats through the Match Centre – Live scores section of their website.
Friday the 9th of JUNE
– Hurricanes v Chiefs

Is it just me or are concussions as common as Kiwi coaches these days?

The issue is becoming a nagging headache for Super Rugby and Fantasy coaches alike. Not only have we seen James Broadhurst’s career cut short earlier this season but we continue to see Charlie Ngatai struggling after his initial head knock over 12 months ago. Currently 22 players have been undergoing concussion testing this week due to, throw in my headache trying to figure out who’s in and who’s out and thats an entire team.

With the Lions Tour fast approaching, there has been a simultaneous sigh of relief from 4.6 million New Zealanders (not to mention the rest of them living in Australia) after reports have confirmed Beauden Barrett and Ardie Savea have both overcome concussion symptoms this week.

Other big name players who are set to return this week, sneaking in just before the impending international break include; Matt Todd, Ryan Crotty, Mark Abbott, Stephen Donald and Lopeti Timani, while the likes of Dane Coles, Reggie Goodes, Matt Proctor, Pat Lambie, Jannes Kirsten, Marcos Kremer and many more are still in the Casualty Ward.

To check out who’s injured, when they are set to be back and who’s returning this week, have a read of The Casualty Ward RD 14.

The Fantasy XV Team (To Date)

This side is picked purely on fantasy points per game, a minimum of 5 games is required. 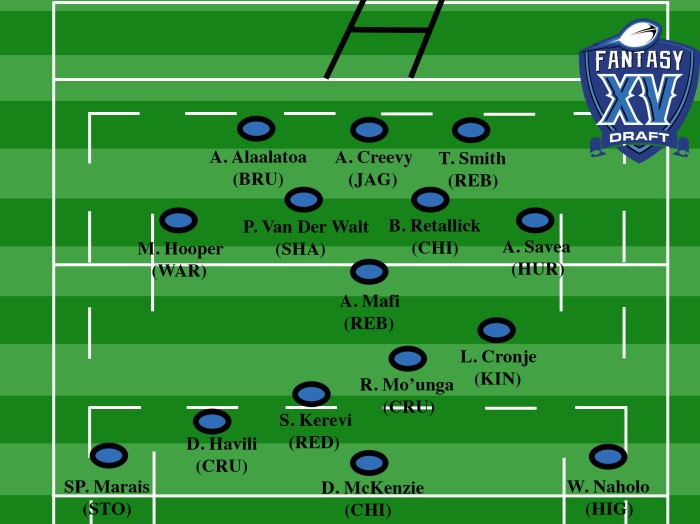 Next week I’ll post up the Fantasy Wallabies, All Blacks and Springbok sides as well as visit a few other talking points for fantasy and rugby in general.

One thought on “The Super Rugby Smartboard”