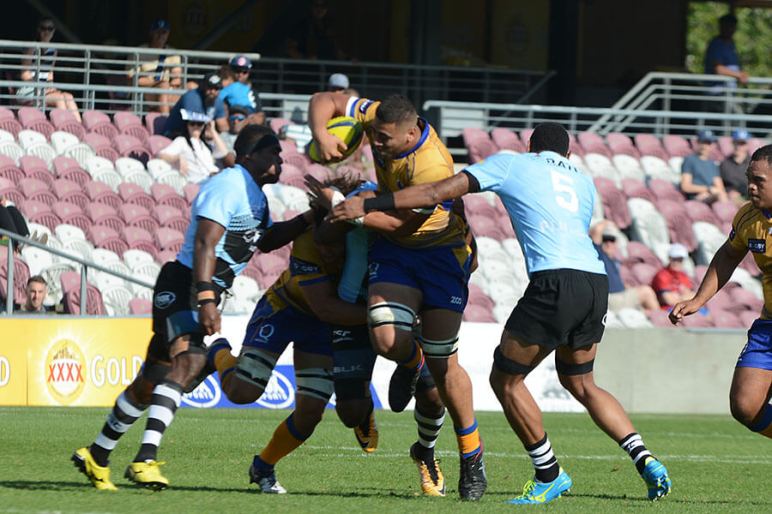 The National Rugby Championship is here and didn’t it start with a bang! Four games kicked off the first round, and with 47 tries between them, it remains an attractive brand of attacking football despite the return to a conventional scoring system.

The Fantasy Super Rugby Season may be over, but the stand out performances just won’t stop. This is your Fantasy XV team of the week.

Team of the Week

Pek Cowan (Perth Spirit) – One third of a dominant front row for the Spirit. Also scored an easy try for his efforts, it would be a real shame to lose this Wallaby overseas.

Tetera Faulkner (Perth Spirit) – What more can you say when a prop scores 2 tries. A big game from a man that is going from strength to strength in 2017. He was a big part of the Spirit’s dominance in the battle up front.

Andrew Ready (Bris City) – Lead his team around the park superbly despite needing an extended break to have his ear stitched up. He was dominant at set piece and bagged one of two rolling maul tries for Brisbane City.

Matt Phillips (Perth Spirit) – Was in everything for the Spirit and thoroughly deserved his Man of the match award. His stocks continue to rise, it will be interesting to see where he plays his football next year in the super rugby competition.

Lukhan Tui (Brisbane City) – Stood out in the NRC to justify his recent selection with the Wallabies. Solid at line out time and abrasive around the field,  the big man dotted down for a try of his own, busting over from a hard unders line close from ten metres out. He also made the third most runs of the round (16) to show his work rate.

Angus Scott-Young (Queensland Country) – The number six was tough to pick this week but I couldn’t go past a workman like performance from Angus. He made 20 tackles in his teams narrow loss to the Vikings and was never afraid to get involved in the tough stuff. He also scored from a pick and drive on the stroke of half time for his side.

Mosese Voka (Fijian Drua) – The Drua’s best in round 1. Made his presence felt at ruck time and with ball in hand. He was rewarded with a well deserved  late try.

Isi Naisarani (Perth Spirit) – The Force big man is at it again. 4 line breaks, 120 run metres and a try showed just how damaging he can be with ball in hand. Is it too early to start naming him as the solution to the Wallabies number 8 problems?

Michael Ruru (Perth Spirit) – It’s always easier to look good behind a dominant pack, Ruru continues to turn heads with his attacking brand of football. He was rewarded with for his work with two try assists.

Mack Mason (Greater Syd Rams) – Had the ball on a string all game as he guided the Rams around the park like a player well beyond his years. The most promising player in Australia’s U20’s 2016 world cup for mine, this classy fly half doesn’t seem to make mistakes. He also chipped in with 4 conversions, 2 penalties, 1 try assist and 1 line break assist. If the Rams forward pack can continue to dominate then he could be the competitions most valuable player.

Sione Tuipulotu (Melbourne Rising) – 1 try, 2 line breaks, 7 defenders beaten and 3 turn overs made for a good looking stats card for the exciting young centre. He is still young, but his potential is massive.

Samu Kerevi (Brisbane City) – Despite making some good running metres he didn’t look entirely at home in the first half against the Drua. But Kerevi well and truely found his feet in the second half.

Marika Koroibete (Melbourne Rising) – Put his hand up to the Wallaby selectors with this polished attacking performance. His blistering pace may have helped him score his first try, but he showed his footwork to beat a defender leaving the Spirit cover defence in his dust for his second. Also topped the log with 5 clean breaks for the round, and came third with his 124 run metres.

Ed Fidow (Brisbane City) – Boy can this man move! He made his 3 tries look easy as he fired a warning out to the rest of the competition, give him an inch, and he will take a mile! As you have probably read by now, it’s a real shame he is already locked in with Samoa through the rugby 7’s program. A real find in this competition.

Jack Maddocks (Melbourne Rising) – What away to remind the Australian Rugby public that he is a man with a big future. 1 try, 1 try assist, 2 line breaks and 1 linebreak assist summed up what was a dominant running performance from the hole hitter.

Sef Faagase (Queensland Country) – Rock solid at scrum time and bagged a cheeky try off the side of a ruck. A good game for the developing prop.
Hugh Roach (Greater Syd Rams) – Roach’s strongest asset has always being his work rate and this game was no exception. Was part of a solid set piece and had three pilfers to show his versatility across the park.
Rory Arnold (Canberra Vikings) – 2 Try assists, 3 off loads. The Wallaby was in everything and deserved at mention in this weeks team.
Michael Gunn (Brisbane City) – Another high quality seven coming through the ranks with a big work rate.
Nick Stirzaker (Melbourne Rising) – Looked to have his confidence back with a couple of try assist and one good long probing run out of his own half.
Duncan Paia’aua (Queensland Country) – The classy second five continued his good form in his first game as captain. Scored a brace of tries.
Peceli Nacebe (Fiji Drua) – An absolute firecracker! This man has serious pace. Scored a double in round 1 and i’m expecting many more to come as the Drua get used to the pace of the competition.