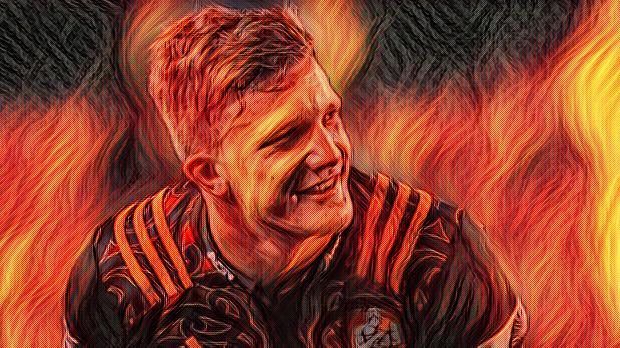 Round 6: Players in Focus

D-Mac top scored this round and despite playing flyhalf, still found many opportunities to do what he does best, tearing apart the opposition on the kick return counter attack. His brother Marty McKenzie was playing fullback and other than D-mac vying for the flyhalf position in the ABs, I can’t for the life of me figure out why it wasn’t the other way round – Marty at 10 and Damian out the back in 15. Set peice aside you would easily have thought this was the case and quite frankly Marty just looked uncomfortable when he was caught out the back on his own. If like me you had been thinking of picking up Marty Mac as a backup fantasy flyhalf, I really don’t think you ought to unless he is playing in his more familiar 1st five position. This performance surely alleviates any concern that D-Mac would not score as well at first five as he would at fullback – he is the type of player who will just find a way.

Captain Pablo certainly lead by his actions on the weekend and took away 81 points (without any tries) just from the absolute mountain of work he got through. He had a try assist, 14 carries for 113m, 5 tacklebusts, 3 offloads, 1 linebreak, 16 tackles, 1 pilfer & a 1 turnover forced. I did have him pegged this season as a reliable source of 30+ points each week but the 81 points certainly surprised me and illustrate that he can produced big numbers and get the Jags on song. The Jags are a different team at home than they are away but Pablo is definetely a backrower I would be starting if they were playing at home.

There aren’t enough superlatives to describe Malcom X(factor) Marx but he is definetely the best supersub we have ever seen. Coming off the bench with 30 to go, Marx managed to knab two tries from three carries.  Thats right, he scored 66.6% of the time he actually got the ball. He made 10 tackles, 1 pilfer and 1 turnover forced and as we discuss on the podcast this week – there is no player ahead of Marx that you would still play off the bench. It doesn’t matter if they only give him 10 minutes – he’ll still find 50 points. Just an incredible rugby and fantasy rugby players.

The Crusaders v Bulls was a truly damp affair, the heavy rainfall certainly slowed down what was already going to be a very set peice dominated game by two sides that feature a more test match style, territory and set peice type of play. This generally doesn’t bode well for Fantasy Rugby Managers and the one shining light was Jack Goodhue for the Crusaders topping this game by a long way and making the Fantasy TOTW with 62 points, 2 tries, 4 runs for 32m, 8 TB, 2 LB, 7 TCK. Jack Goodhue is definetely a talent to for the future and I think is deceptively much bigger than he looks. He got stuck into the dirty work like he had the 6 or 8 on his back and really lead the Crusaders through this one. The point drop off was steep after him with Codie Taylor on 36 points after nabbing himself a try off the driving maul and a relatively quiet encounter. Out the back, wingers Travis Ismaiel finished with 36 points for the Bulls and George Bridge with 32 points after they both came away with a try to their names.

Lots of tries and lots of fantasy points shelled out in this one. Topping the points in this fixture in what had to be man of the match from both a rugby and fantasy rugby perspective was Billy Meakes (59 points – TOTW). Last week Bill came off the bench early on and delivered a hell of a performance with 47 points to earn a starting spot this week and boy did he deliver. Meakes tore up the midfield with 7 tacklebusts, 2 linebreaks and a try. You’d have to think he’ll be starting again next week after that performance but it will be interesting to see how he goes up against Ngani Laumpe and the Hurricanes backline. Up front, Anaru Rangi (51 points) had a hell of a game in his second start for the Rebels, as an injury replacement for Jordan Uelese. For news on all Super Rugby injuries, check out The Casualty Ward. The backrowers getting it done were Jean-Luc Du Preez (46 points) for the Sharks and the Rebels Fantasy God Amanaki Mafi having a quiet one by his standards, also on 46 points. Will Genia (Willy G) had another blinder with 40 points, diving over for a try himself and Marika Koroibete (42 points) is yet to score a try in 2018 and just needs to get himself some more ball in hand. He looks dangerous and I think we can expect some big things from him if he can get himself some of that front foot ball to come his way.

We already mentioned D-Mac’s return to greatness with 91 points but this game was just great for Fantasy points all round fast paced, end to end, running rugby. As many did, you would have been right to just pick yourself up some chiefs players as they all did well this week. Toni Pulu (64 points) was inserted straight back into the starting lineup on the right wing and he showed no signs of any niggles as he bolted around the field. You’d expect at least one try for a 64 point performance from Pulu but not even, he had a try assist, 9 runs for 100m, 4 tackle busts, 1 offload & 4 linebreaks!! Pulu will surely be the Chiefs starting right winger going forward so if your looking for a game changer and he is free in your fantasy league, snap him up quick. Solomon Alaimalo (58 points) wasn’t far behind and whilst he didn’t get as much ball as Pulu, he got it in the right places and dotted over for two tries. All-Black midfielder Anton Linert-Brown (53 points) was dependable as always and played the pivotal role as link man from D-Mac at 10 to release his wingers. Rounding out the Chiefs performances were the locks, Brodie Retallick (41 points) another try and another strong showing and fellow locking partner, Canadian International Tyler Ardron (48 points) put on a hell of a show for his first start for the Chiefs and in Super Rugby. Ardron is a player I have had my eye on and apart from gloating that I picked him up last week, I’ll leave discussion about him for the Stock Market article to come out in the second half of this week. Now onto the sunwolves, as always it was the wingers that impressed – just seeming to find some space and then bust through. Japanese Internationals Hosea ‘Tongan Godzilla’ Saumaki and Kotaro Matsushima’s late replacement Lomano Lemeki both finished with 46 points and about 100 run metres each and honestly it looks like it doesn’t matter who they are playing, they are going to score fantasy points.

‘Big Ben’ Lam from the Canes top scored this matchup with 63 points, 2 tries, 8 runs for 57m, 4 tacklebusts, 2 offloads and 2 linebreaks. There was some pretty incredible finishes in this game and both of Ben Lam’s tries took some doing (see the picture above where he manages to get it down as he is bundled across the sideline by three highlanders). I think his form will warrant his continued selection in the starting side and I’m sure he will feature in this weeks Stock Market. Ben Lam was really the only standout when it came to fantasy points in this fixture with the points being fairly evenly spread throughout both teams – alot of players in the high 20s and 30s. His opposite number, All Black winger Waisake Naholo came in second with 40 points, also with two tries to his name. Matty Proctor ended a solid performance with 39 points and the Barrett brothers took out the rest of the lions share, Beauden with 37 points and Jordie with 36 points.

This certainly wasn’t the highest match score of the round but there were fantasy points aplenty in this one. Despite going down in the end, the Reds took out 5 of the top 8 fantasy scores from the fixture. Caleb Timu topped the game with 64 points and has just been getting better each week (quite literally – see his points in the table below). He continues to back up with these outside back like numbers; 9 runs for 100m, 3 tackle busts, 2 linebreaks and pairs that with his workhorse nature – 14 tackles. Next up was Alex Mafi (61 points) who absolutely stood up in his first start for the year and for the Reds. He was rewarded for his hard yakka around the park with a well deserved try off the back of the driving maul. Brad Thorn is certainly bringing out the best from these young Reds forwards. Then onto the Reds back, Filipo Daugunu brought home 55 points, about 30 of which I am going to attribute to his 85m runaway try and both Samu Kerevi and Jono Lance ended up on 46 points for similarly stellar efforts. The home team was lead literally from the front with big prop Wilco Louw bagging a try and an even 50 points for an immense effort on his behalf, almost playing out the entire 80 minutes. The other performers for the Stormers were from the worst defensive player in Super Rugby, Raymond Rhule (48 points) and the one of the best locks in the world, Pieter-Steph Du Toit (42 points).

We’ve already discussed both Don Pablo Matera’s match leading 81 point haul and Malcom X(factor) Marx’s 79 point supersub but there were a number of other fantasy performers in this free flowing match. In terms of Fantasy points, it was all the Jaguares in this one as they dominated possession and really took it to the Lions from all parts of the field. Emiliano Boffelli (70 points – TOTW) scored 2 tries, had 9 runs for 104m, 5 tacklebusts, 2 offloads, 2 linebreaks and created a linebreak. He is one of those players that can really bring home the bacon for fantasy managers if he get get himself involved in a game and that was certainly the case this week. He had an impressive finish with a chip and regather for one of this two tries and was found himself in the right place at the right time throughout the game. Javier Ortega Desio (58 points – TOTW) had an absolute blinder with two tries to his name and outside back numbers with 9 runs for 90m and 2 linebreaks. He has been getting better every week and appears to have locked down that number 8 jersey although there is the experience of seasoned campaigner Leonardo Senatore returning from injury. Otherwise Nicolas Sanchez (51 points – TOTW) was accurate off the boot and combined well with fullback Joaquín Tuculet (48 points), the pair putting creating many opportunities for their Boffelli and Delguy on the wings. Aside from Marx for the Lions, there was a noteable performance from athletic lock Marvin Orie (48 points – TOTW), rewarded with a try for his hard work around the park, with 15 tackles and 9 lineout takes. Orie looks to be suring up a starting role in the locks, particularly if the Lions continue to play Springbok Lock Franco Mostert on the Flank.