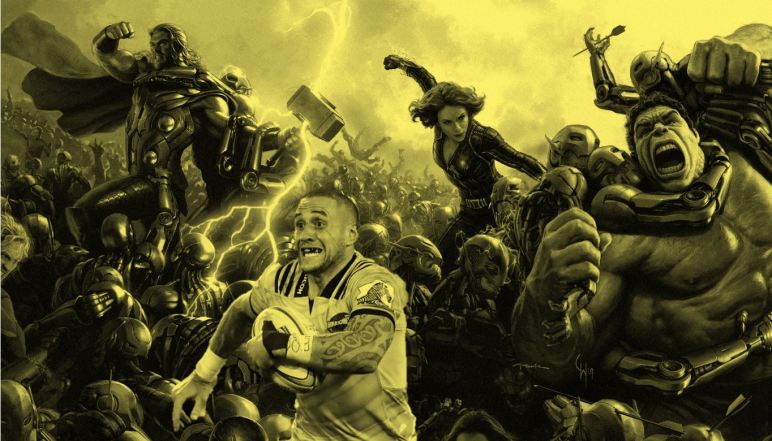 What’s with the photo? Well I thought it appropriate to both celebrate TJ Perenara’s super hero like effort (Fantasy Man of the Round!) in carrying the Hurricanes to a victory against the Sunwolves and just as importantly, I am excited for the Avengers: Endgame movie released in cinemas this week! Let’s check out how things shaped up in Fantasy Super Rugby 2019 round 10.

Two of round 10’s players in focus were from the Sunwolves vs Hurricanes match, with TJ Perenara taking out Fantasy Man of the match and Round with one hell of a captain’s knock and 84 points. Semisi Masirewa continues to defy our fantasy predictions and now has the 8th highest average points (42.4) for outside backs. He killed it yet again in this one with 79 points in round 10 making this his third time as a player in focus with one of the top three fantasy scores for the week. Last but not least is a player who if I am quite sure has never made this list before, the Brumbies tall timber, Rory Arnold who had the fantasy super rugby game of his career with 74 points.

TJ Perenara always new he always knew he was going to step it up with the absence of key pivot, Beauden Barrett (& brother Jordie Barrett) being rested for this one but I bet he didn’t realize just what was going to be required of him! After realizing that young flyhalf Fletcher Smith just wasn’t quite cutting it, TJ put on a masterclass effectively playing 9 and 10 simultaneously and absolutely terrorizing the Sunwolves in the second half. He made 11 runs for 80m, 3 line breaks, 5 tackle busts, 2 offloads, sold one hell of a dummy and bagged himself a try. This performance see’s him now top the log with the highest average points (42.1) of all the scrum halves just nudging out an in form Will Genia (41.8).

At what point do we stop talking about Semisi Masirewa defying the odds (& all logic!#$??) and just acknowledge him for the super rugby fantasy weapon that he is in 2019. Semisi’s 3 round average is the highest in the competition at 87.3 and his 5 round average is 4th at 56 (behind Malcom Marx 59.8, Rieko Ioane 58.4 & Samu Kerevi 56.6). He has started in 7 of the 8 games he has taken part in this season and been sat out for one by the man we all thought had a mortgage on the jersey, Hosea Saumaki. His 79 points in round 10 came by way of 11 runs for 148 metres!!!, 4 Line Breaks, 4 Tackle Busts, two tries and a turnover won.

Rory Arnold must have just decided that he wants back in the Wallabies this year because he played like his life depended on it this week. He put all of his 208cm, 120kg frame to good use this week absolutely dismantling the Stormers driving maul, winning 8 line outs, charging down a clearance kick and pirouetting like a ballerina for a try and making a game high 24 tackles.  He also had a try assist and made 9 carries. He ended up with 74 points for his efforts and will has been firmly put back on Michael Chieka’s Wallaby watch list. He’s just got that bit of mongrel about him.

See how your fantasy team compared against the Super Rugby teams themselves.

After throwing the chiefs off with their fake starting team lineup (#LINEUPGATE or #TEAMLISTGATE?) that had both Malcom Marx and Elton Jantjies on the bench, game day changes saw them both taking the field from minute one. The Lions came out firing and really gained from the return of two of their star forwards, captain Warren Whiteley and Kwagga Smith who were impressive. The Lions played the game with width and at pace but they also really dominated the set piece, especially the scrums winning 7/7 on their own feed and pushing the Chiefs off two of their own.

Even though you wouldn’t have thought it possible with these two teams, the game did get a little boring at times with some really average kicking battles taking place. I’ve actually seen better games of primary school forcing’s back! The Lions found themselves up 20-0 before the Chiefs finding some composure and their way back into the game in the second half.

The Sunwolves tried an interesting strategy in this one that I have to say was largely a success. They moved eighth man Rahboni Warren-Voyasaco to inside centre essentially just to defend the unstoppable force that is Ngani Laumpe. Rahboni nailed that brief and looked pretty handy in the backs, making a great line break off some set piece to put masirewa in for one of his two tries. If you had turned on the TV just before half time, you would have been shocked to see the scoreline read 23 – 7 to the moondogs! The Sunwolves took their opportunities whilst the Hurricanes just looked a rudderless in the first 40 and Fletcher Smith couldn’t seem to get the ball out to his men outside. In the seconf half, TJ Perenara just took over the entire game and it all down hill for the Sunwolves when the Haydar missed a kick at goal (he went 5/6 for the night).

The Queensland Reds punished a woeful Sharks side that couldn’t seem to bring it together and consequently suffered their fourth loss at home this season. Where has Rob Du Preez been in 2019? The Sharks looked rudderless without their pivot playing some good footy this year. The young Reds side just stuck to their game plan and executed relatively well. Two of the three Reds tries were off the back of a bit of brilliance from captain Samu Kerevi, both line break/offload combos.

In the scrum it was very much a case of the young bucks vs the old bulls. Harry Hoopert (20 years of age) and Taniela Tupou (22) up against Springboks, the Beast who recently became the most capped South African super rugby player of all time and Coenie Oosthuizen who also has over 100 super rugby games. Whilst there was certainly some back and forth I’d say the young bucks took this one out in the scrums and around the park. Out in the backs, Sbu Nkosi was an absolute handful, he made some rampaging runs with ball in hand and made 9 tackle busts returning from injury and the Sharks looked like they really missed outside centre Lukhanyo Am who was rested for this match.

The Highlanders were certainly more dominant than the scoreline suggests in this match but it was a great New Zealand derby nonetheless. Ma’a Nonu continued his great form and campaign to make the All Black’s one more time for the rugby world cup by splitting the Highlanders open and setting up Tom Robinson in the corner for the first try. Whilst the Blues scrum seemed to have the upper hand in the first half, with the start of the second, the Highlanders drover over a 5m scrum for a penalty try. The scrum battle was fierce and there were about 100 scrum restarts in this one. Matt Faddes took his second intercept in two weeks but unlike in round 9 when he pulled up lame, this week he had enough gas to run 50 odd metres and finish. Ultimately the Highlanders workmen like pack just got through more work around the paddock and at ruck time, the blues not doing enough to protect the pill.

In the battle for top spot of the Australian conference and the much fabled battle of the wallaby fly halves, both teams brought a lot of line speed and both teams played well against it- pushed hard through the forwards in tight and looked to kick into space. It was in line with the narrative for round 10, the Rebels took out the first half (they were up 20-7 at half time!!!) before it was all Waratahs in the second 40. The Rebels gave up 7 penalties in a row in the second and just couldn’t come back against the momentum of the Tahs. This game ultimately came down to kicks at goal, Bernard Foley was 100% 5/5 whilst Quade Cooper was 4/6 for the Rebels. This game was probably the least exciting to watch of the round mainly due to all the dropped ball!!! The lack of basic skill execution saw both teams try to keep it in tight and the game was probably decided by a Rebels line out overthrow that was contested by both Foley and Cooper but Foley grabbing the ball and running the 50m for a try. It would have gone either way but it didn’t for Quade on the night. Stand out performances were from Adam Ashley-Cooper providing a cool head and really making the most of the ball he got and Will Genia was an absolute pest at the Waratahs set piece.

The Brumbies came out firing scoring two early tries in quick succession before both teams shut up shop and the tackle fest ensued. You look at the game stats and it’s hard to understand how the Brumbies managed to win this one. The Stormers just refused to try anything new and the Brumbies just got more resolute in their defensive efforts as the game went on. they really dug trenches on their try line and wouldn’t give in. The big moment in this one was after calling half time, the ref brought the teams back on the field to look at a high tackle and eventually called it a penalty try and yellow carded Toni Pulu. The decision was legit but I’ve never seen anything like that before once a team is already half way up the tunnel into the changing room. Talk about home ground advantage at its best!