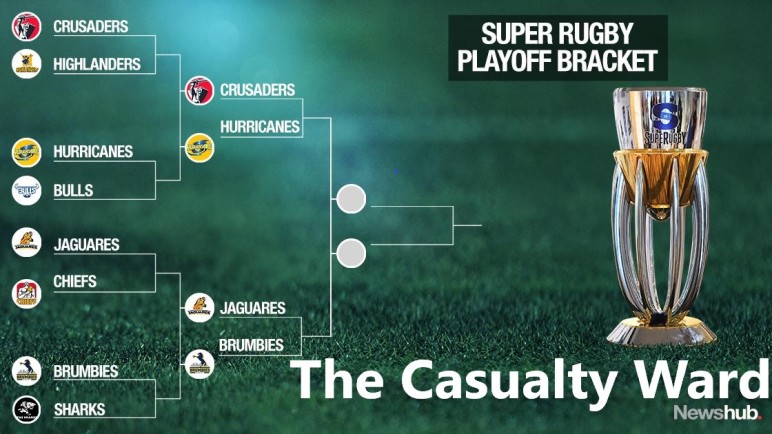 The Semi-Finals edition of the Casualty Ward will only list the teams still involved in the competition!

Season 2 Episode 24 of the @DraftRugby podcasts will be available from Tuesday morning (AEST). Cargie, Harry & Nelson review the Super Rugby Quarter Finals , preview the Semi Finals, and give you a tasty dessert, all through a Fantasy Rugby lens. Tune in, rate, review and share us. You’ll find us across all platforms on the links below:

Returned from Injury in the Quarter Finals

Ben Smith (Highlander) – A high hamstring tear and a concussion in round 12. Made his long awaited comeback for a quality farewell from Super Rugby.
Codie Taylor (Crusaders) – Came back from a broken finger in round 14. Played 48 minutes and didn’t miss a beat.
Owen Franks (Crusaders) – Started after recovering from a rotator cuff tear in his shoulder. Played 48 minutes and dominated at scrum time.
Beauden Barrett (Hurricanes) – Back after a rd 18 rest week.
Ngani Laumape (Hurricanes) – Back after a rd 18 rest week. Was largely controlled by the Highlanders midfield.
Wes Goosen (Hurricanes) – Back from a Rd 16 hamstring injury but looked to have re-aggravated it in the first half.
Jeffery Toomaga-Allen (Hurricanes) – Came with a shoulder or neck injury in rd 17, recovered to start this week.
Ben May (Hurricanes) – Came back via the bench this week.

Curwin Bosch (Sharks) – Sprained his ankle in rd 17, came back in the 15 jersey and was one of the Sharks best.
Jesse Kriel (Bulls) – Had ankle surgery after rd 11. Made the first line break and try assist of the game so didn’t look to have any lingering effects.
Jason Jenkins (Bulls) – Recovered from a quad injury to start at lock.

Shannon Frizell (Highlanders) – Pulled pregame with an infection in his knee that was apparently not serious. Source.
Tim Perry (Crusaders) – Pulled pregame with a flare up of his arm fracture. The medical staff ordered an x-ray. “There are more scans on it [to come],” Robertson said. “It’s still not 100 per cent healed. So how long he’s out for, we’re not sure. Source.
Jack Debreczeni (Chiefs) – Looks to have torn his groin kicking at goal early in the second half.
Wes Goosen (Hurricanes) – Picked up a hamstring injury in the first half.

Pete Samu (Brumbies) – Looked to have tweaked a hamstring scoring his first try. Aggravated it further on the stroke of half time and didn’t come back on after the break. Apparently he had a hamstring niggle going in to the game. Won’t travel for the Semi-final but hopes he can play a possible grand final. Source.

Dan du Preez (Sharks) – Copped a rib injury that he tried to play through but couldn’t manage. I’d be surprised if it wasn’t broken.
Tyler Paul (Sharks) – Came off after 15 minutes at the same time as DdP with a left shoulder injury.
Guido Petti (Jaguares) – Sprained his ankle in the quarter final. Was in doubt for the semi, but has been cleared to play. Source.

Likely back for this week (Semi Finals):

Ramiro Moyano (Jaguares) – Tore his soleus muscle (calf) on his left leg in rd 16. Expected to be out for 4-6 weeks but has recovered quicker than expected to take his spot on the bench this week. Source.

NEW ZEALAND
All Blacks are expected to miss two weeks during the Super Rugby season.
All Blacks are also not meant to play more than 6 game weeks in a row.

Hurricanes
Andries Ferreira – Suffered another knee injury. Has been sent back to South Africa to recover. At this stage he is not going to play with the Hurricanes, but they haven’t ruled out something in the future. Source.

Crusaders
Ere Enari – Won’t be available for the quarter final due to an MCL injury he picked up in rd 17. Source.

ARGENTINA
Jaguares
Javier Díaz – Suffered a tear to his left Adductor (groin) in rd 13, out for 3 to 4 weeks (rd 17-18). Source.
Lucas Paulos – Failed his concussion test in rd 18. Will have to go through concussion protocols to play this week, but he is unlikely in the top 23 anyway.
Juan Manuel Leguizamon – Picked up an injury during the warm up for rd 18 and did not take the field. Not likely to be in the top choice team anyway.

Gone for the season:

Vince Aso (Hurricanes) – His round 4 pec injury will now rule him out for the season. Source.
Nehe Milner-Skudder (Hurricanes) – Injured his shoulder on November 3. Didn’t recover as planned so he has gone under the knife again after rd 17. Source.
Manasa Mataele (Crusaders) – It has finally been confirmed that his season is over after rupturing his ACL. Hopefully he is back terrorising defences next season. Source here.
Israel Dagg (Crusaders) – Officially retired from rugby at age 30 due to his arthritic knee.
Tom Sanders (Crusaders) –Dislocated his shoulder in round 6. He has had surgery before round 8 and won’t be back for six months. Source. Sam Nock (Blues) – Had an operation on his finger after breaking it in round 13, gone for the season. Source.

Ben Hyne (Brumbies) – Re-tore his ACL just before Christmas, will likely miss the full season. Source here.
David Pocock (Brumbies) – The calf tear that never ends. He has retired from Super Rugby. Source.
Josh Mann-Rea (Brumbies) – Flown home from the tour after tearing his ACL against the Stormers. Gone for the season. Source.

Gonzalo Bertranou (Jaguares) – Dislocated his shoulder and is having an operation on the 22nd of February. No return date has been set, but generally it is a five month lay off (mid July at the earliest). Source here.
Bautista Delguy (Jaguares) – Had surgery for an ankle injury after round 5 and has been ruled out for 4 months. Gone for the season. Had screws removed from his left ankle and is training heavy in the gym. Source.
Matías Alemanno (Jaguares) – Had an operation on his big toe for a Hallux Valgus (bunion), back in the gym now. Source.